A Paean to the Isle of Mystic Land. 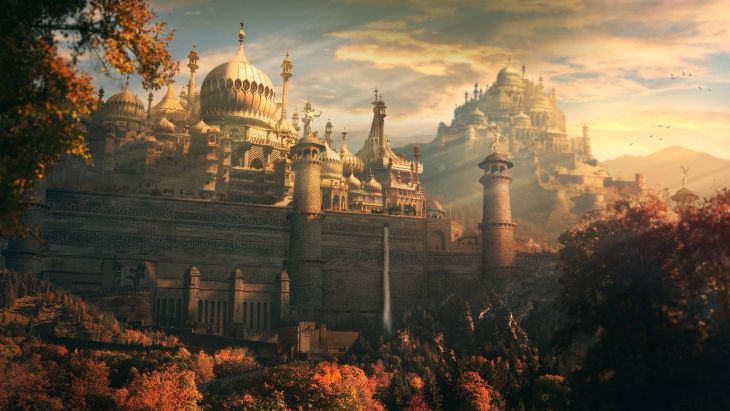 O'lord the isle is here, a soldier told lord KIEN holdin' a spear.

The isle is same as told, a land full of glories and gold.

When the ship reached the isle isle of mystic land, it is eve time of the day by then.

The dazzling beach and orange sand, orchids are occupying most of the land.

A magic of Maelstrom was stuck in lord’s mind, the myths are real and tales are true.

As they reached the land after months of voyage, a wain reached there and the men seemed kind.

The charming prince of N’arthia came forward and told them we are not here to foray.

Lord KIEN is standing beside the prince VOLTRAY.

They know the common tongue and letted them stay.

A bright white horse is passing near the shipmen, lord KIEN is confused and curious about these men.

Carts and horses are called to escort them to the castle.

The ride is going to be with hustle.

Everyone is tired and having pain in every muscle.

The prince is riding a deep black horse, while lord KIEN is in a brown one.

And a cart was given for their luggage to escort.

The isle is the most beautiful place they've ever seen.

The officials are wearing some livery, their clothes are dirty and they feel misery.

Everything has a touch of divinity, the level of ecstasy there is infinity.

The grasses are shining like the floor full of malachite. The magic of cool breeze and warm sun is spreading wide.

The horses are passing through houses and farms and markets, no one is sad though there is only bursting packets of happiness.

The orchids with apples as red as blood itself, the gardens of jasmine's smell full of heart.

The blue shining flowers of lobelia are intimate meanwhile, the gardens full of grand quince shining pale yellow with freesia is desired apart.

Then they finally reached near the castle. The castle is situated on the other side of loch,the bridge was built to join the path.

The orifice of castle is like the gates of heaven,the grey-black castle is malodorous.

"A marvelous castle" lord KIEN whispered in prince VOLTRAY's ear, a shadow and some footsteps approaching near.

"Welcome prince" a loud voice strambbled the walls of castle.

The whole crew is extremely tired, so the table is set in the hall and woods are fired.

And then the delicious food is finally served, trivets of gold and folks of silver, the tasty smell makes them wilder.

A pleasure they had after a long time, exotice meal and a glass of good wine.

In the midst of the night, a girl came with king beautiful and bright.

A lady of charm and exquisite boldness, stealing eyes of every mister and mistress.