Today I am here with a story which is based on a serious issue. Hope you like it:)

So, the story revolves around a 7-year-old orphan girl who's been adopted by a politician.

Piyush Goyal is MLA from MYG party who is standing in election as a representative from his party to become a chief minister. Sadhna Goyal,Piyush's wife, is a member of parliament.

We know that some politician are there who donates, distribute essential item to the poor ones and do other charity work just to draw people's attention and to win the heart to make them vote for them.

Although Piyush Goyal was representative of his party, there wasn't any reaction from the other opposition party and from the public. so he decided that he will have to do something to make people notice him and vote for him.

Piyush asks her wife to advice that what they should do to solve all this. Several ideas came to their mind but they were not completely satisfied with the ideas. Suddenly Sadhana shouts in exciting voice "what about adopting an orphan that will be a good idea?right?" Piyush stands widening his eyes with a bright smile, "what an idea Sadhana it will definitely attract people,as it is easy to entice people emotionally".

They both go to an orphanage where they adopt a very beautiful girl. They both just signed the document and left with the girl. After coming home they made her dressed beautifully and gave her name Aradhya and posted a picture of her on social media by captioning, "adopted Aradhya, orphans deserve happiness too".

Their technique worked and they not only gained the praises by the public but also they were praised by the media too. Seeing people reaction they were very happy, they kept on posting her photos by making her dressed different clothes, but they forget that the girl is just of 7 years who needs love and who wants to talk, but both husband's and wife's only motive was to attract people's attention. 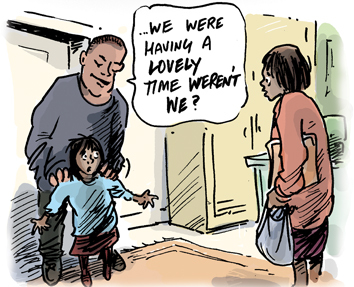 One day, Piyush invites his political mate to his home for dinner named Dharmesh Sinha. He came to Piyush's house with his wife and his 8-years-old daughter Sanya. Dharmesh's daughter becomes very happy after seeing Aradhya that she got a friend to play with. They all had dinner, they talked for some time and Dharmesh's wife Dr. Shikha goes to kid's room where both the girls were playing. She knocks on the door, "can I come in".

Her daughter says in loud voice, "yes you can".

"No I want to play more with Aradhaya", Sanya said.

"We will get late, it's already 9 p.m. I will get late for the hospital in the morning if I would not sleep on time", Dr. Shikha said.

"Ok dear", Dr. Shikha sits on the couch and looks the children playing. Suddenly she notices that there are some marks on Aradhya's neck, she checked out and finds out the same black marks on her full body. She asked, "Aradhya what is this? Who beated you so brutally".

Aradhya said nothing but Dr. Shikha understood that she's been beaten continuously and Piyush and Sadhana treated her as a tool to take out their frustration.

Dr.Shikha starts touching the black marks on her body.

When Dr. Shikha reaches home, she tells everything to her husband about Aradhya.

"No, please don't talk this to anyone otherwise it will ruin my relationship with Piyush, and according to the current scenerio he will definitely win this election", her husband said.

"But she is very small to bear all this pain, come on Dharmesh we have to do something about it", Dr. Shikha said.

"No, just forget about all this and sleep", her husband said. She gets upset that she can't help Aradhya.

After three to four days Dr. Shikha gets a case of a girl who's every organ was damaged, no organ was left which was working nicely.

"Doctor its room no. 107", nurse said. They both run to room no. 107 and Dr. Shikha get shock after seeing the patient, it was Aradhya. She tries her best to save her but could not, Aaradhya dies.

After Aradhya's death media and public who were praising Piyush and Sadhana realises that they were fooling people to make people vote for them. As soon as Piyush's party gets to know the whole case, they dismissed him from his party and they were arrested.

Some questions are there in my mind which I am sure you will agree to be put on:

Why there is no strict rule regarding adoption?

why people don't raise voice against the person with whom their relation is good even if they are wrong?

Why people consider charity as the plus point and method of extracting votes in politics and appreciation in acting or any other?