The Adventures of Bertha 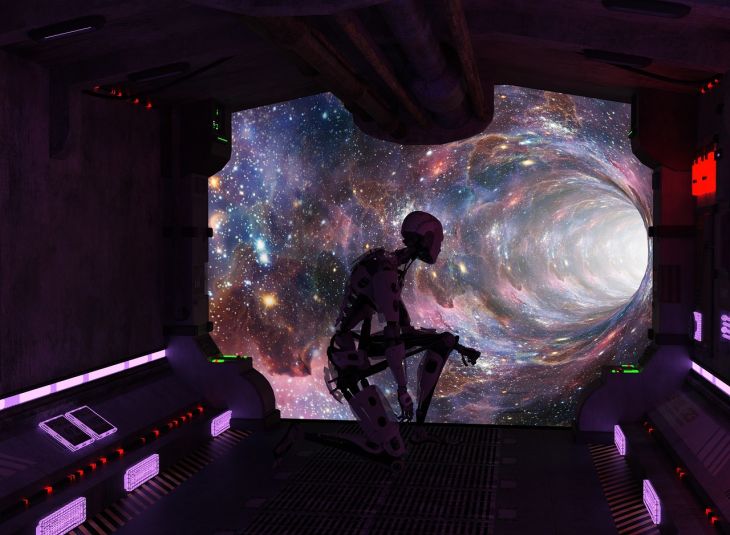 The explosion shook the whole building and the three shadows in the dark tower froze.

“Hurry up! We are going to die” Bertha shouts from the top of the ladder. Her M16 was slung on her back while her pocket knife and Glock automatic pistol peeked out of her gun holster.

Below her, the three figures move hurriedly. Their only source of light is from the top of the tower and they are desperate to reach there. Fatigue from past events wore them down and sweat trickles down their body as they try to hurry. Their weapons and luggage clanks together and the ringing echos in the dark tower.

They finally reach the top and climb out cautiously, trying to make minimal sounds. They crouch behind the three silos and the lean guy who was wearing brown overalls takes out a pair of glasses and analyses their surroundings.

“I think it is clear, I see no one here”, Marcus announces after a brief examination.

“Be careful, you never know with these automatons, they have eyes and ears everywhere” Bertha warns him and makes a beeline towards the lab. The lab is their end game. If they reach there in time and disable the crucial defence systems, they will have a fighting chance.

As they are about to reach the room with the tag ‘Assessment Room A’, they break out in teams of two and perform left and right flank.

“Clear” Bertha whispers into her earpiece after cautiously examining her side of the flank.

“Clear” Marcus whispers back march forward when suddenly the soft blue lights turn red and a buzzer goes off. Marcus and the woman behind him duck inside the door marked ‘Storage’.

“Shit, we must have triggered something”, Shiela says with an exasperated sigh.

“Don’t worry, we will fix it. It must have been a laser tripwire. We should have given more attention to the Staff ID Card Reader at the entrance of this lane.” Marcus tried to calm her down while worrying about the whereabouts of his companions. He reloads the magazine of his assault rifle and motions Sheila to do the same and the two of them hide at the end of the racks.

Meanwhile, Bertha and her companion are running on the other side of the blue-lit hallway. The buzzer sound is close but they are not in immediate danger of being found.

“Marcus, you take care of yourself. We will try to disable the defence on this side, you keep them occupied somehow as we have no other option.” Bertha orders into her earpiece and signals Romon to run faster.

“Do not worry about me. You do what is required and I will try to keep most of them here. Bertha, we have to succeed today or everything will be in vain.” Marcus replies in an instant. He hears shuffling outside the door and signals Shiela to be ready.

Sheila takes out a green smoke grenade from her holster and crouches down, her eyes are fixed at the door, ready for a fight. She signals a thumbs up to Marcus who then takes his position.

Meanwhile, Bertha and Romon reach the end of the hallway into a T-section.

“We are in deep trouble”, Romon huffs “We need to choose which direction to go, I cannot clone the key”, he says.

“You think I don’t know that already?”, Bertha says, annoyance dripping in her tone.

“I am not skilled enough in computers to crack the encryption and break the defence systems. I suggest we start with the left side of the corridor as the first door marked here is named ‘Defence A1’. Now hurry”. She declares and moves past Romon

Bertha leads the way towards the left corridor when suddenly she feels a stark pain in her left leg and cannot move at all. Romon stops for a second, assuming she heard something when suddenly a figure appears in front of her.

Two gigantic mechanical monsters marched towards them. The tall one was much leaner and walked with agility. Its head was shaped like a human skull but the expensive metal gave it a softer look. Its eyes were wide and intelligent and it carried a small circular weapon in its hand. The shorter one was buff and moved slowly. It looked similar to the other one but on closely inspecting, you could make out the differences between them. The tall one was XH10, an automaton designed specifically for acute intelligence and agility whereas the short one was the ZB800 model, designed for army work and brawl management, except, it fell into brawls faster than it ended one. The XH10 models were commonly known as Dark and the ZB800 models were commonly known as Red.

The two humans covered in their presence but quickly regained their strength. Bertha took her rifle in her hand whereas Romon sat down the luggage bag and brought forward his Machine gun which he stole from one of these robots they killed.

The two of them braced themselves but Bertha was still paralyzed and Romon was scared. The automatons knew they were in a position of power and moved slowly as if they had all the time in the world. Red came forward and Romon started firing at him but he was fast for his size.

He ripped the machine gun and took Romon by his neck and threw him.

On the other hand, Bertha sends a grenade flying towards Dark who caught it right before it exploded in his hands, singeing them off. Dark seemed unbothered and raised his weapon towards Bertha who fired her assault rifle at him, knocking his weapon off his hand.

Romon could feel his broken ribs, his left side was burning with pain. He got up and hobbled towards his green bag and crouched in front of it. Red gave him time, he was enjoying this. Unfortunately for him, he did not catch onto Romon’s plan who set off a smoke grenade.

While the smoke shielded him, he took out a needle from the luggage back and injected the green liquid into his arms. Instantly, the pain was gone and he was filled with newfound strength. He took one of the needles to Bertha and quickly injected her with the same. The paralysis which bound her to one place broke and she was free to move again.

Regaining their strength, the fight started once again with Bertha facing Red in hand-to-hand combat. Filled with the liquid strength, which lasted for about an hour, the combat was close when suddenly, Red flipped Bertha on the ground and stomped on her body, breaking a few ribs.

Romon got distracted by her cries and that one moment of diversion was enough for Dark who put him down. While Romon managed to regain his senses and fend the attack, Bertha was not so lucky.

Red squeezed the life out of her and she managed to choke out “Win for me Romon”. Slowly, she fell into a deep trance and was finally in peace.

The sound of the machine was pestering. Bertha opened her eyes slowly to be blinded by lights.

“Where..” she croaked, unable to speak. Her mouth felt dry as if she had not had anything to drink for a long time and she felt numb all over. She tried to sit up and black spots danced around her eyes.

When her eyes finally focused, she found herself to be in a red room. There was all sort of machines around her and she saw a sign on the door. It read, JAJA IND.