And then there were none | Book review 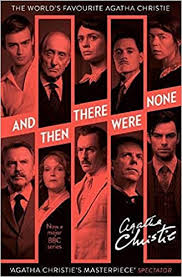 I think I had placed my expectations too high on this book before I'd started it. Hence the four-star rating.

What can i say i love mystery novels and this one is surely one i enjoyed so the story :-

The premise, I am sure you know, is this: ten people end up cut off from the world on a tiny island. One of them is a murderer and people keep dying as in the nursery rhyme. Every person on the island has a secret and is guilty of a murder. It's the kind of murder where law is helpless. Nothing can be proven. This is why they found themselves on that island, at the mercy of a prototype 'Jigsaw' madman who decided justice must be done.

The premise requires the structure of the novel to be very organised and clean cut. I felt that it was only right for me to approach the reading of it in an equally disciplined way. I took five sheets of papers and divide each in half, thus ending up with ten cards, one for each character.

I grew to like two of the characters - the sentiment, I think, I shared with Christie as she liked them so, she killed them last.

This was my second Christie, and the first proper one. The first one I read was a bit of a mishap spy novel, so Christie's brilliance wasn't as apparent as it was in 'And Then There Were none .

And Then There Were None is a grim but riveting mystery. One of the darkest aspects of the novel is the fact there's no "good guy" here -- all of the characters appear equally guilty in more ways than one. This is an exciting book -- however grisly -- that is to be enjoyed for its page-turning plot and Christie's masterful construction around the spooky nursery rhyme