CAN BEING PERSUASUIVE AND MANIPULATING BE CATEGORIZED AS A NEGATIVE TRAIT?? 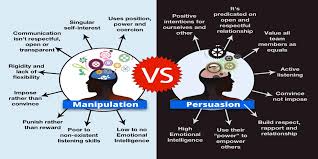 Today’s topic is ‘ can being persuasive and manipulating be categorized as a bad or negative trait ‘. So everybody has his/her opinion on this topic but here I am expressing my view. I hope you guys like this article and respect my views.

WHAT IS A NEGATIVE TRAIT?

Negative trait is basically a negative image formed by any person for another person by observing his/ her characteristics, behavior, language, or mentality. It is a type of a bad or something unusual character which throws the image of a particular character.

WHAT MAKES A TRAIT NEGATIVE?

Whenever you meet a person, you observe his/ her pattern of behavior, language, mentality just by the way of speaking. Similarly when you talk with a person, you start noticing or observing him/ her which will automatically creates an image of that person in your mind. If you will start liking his/her conversation, you will find that person interesting and you may get attracted to him. And thus you will find a positive trait in that person. In the same manner if you will find something vague or conversations which you don’t like or affected you, that person’s image in your mind will be reflected as a negative trait.

Being persuasive basically means to have a personal belief or thought or the act of influencing someone to do something or to change their mind. Whereas, manipulative means to use , move or control something. Well, such kinds of traits are positive if a person is in sales profile, or doing a job in sales or marketing. This kind of person being persuasive can excel in his/her life. Because this trait will act as his/her strength, to influence someone to buy a product. Someone with persuasive personality traits is able to convince others to do, believe, or buy things…. No matter how they do it, end result is same: Persuasive people have a higher than average success rate at convincing others to go with their agenda.

In the same manner, manipulation is commonly thought to undermine the validity of consent has led to its frequent mention in areas where the validity of consent is at issue. One such area is medical ethics, where proposed conditions for autonomous informed consent often reference the need to ensure that consent is not manipulated. However, there is far less agreement about how to determine whether a given form of influence is manipulative.