Evils of the Indian society 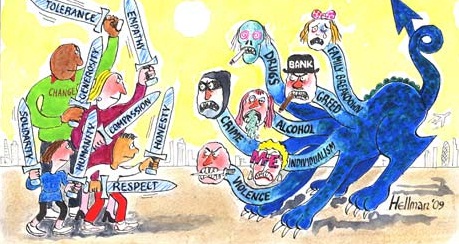 Our society has seen immense progress; from economic and social backwardness and draconian

traditions and practices like sati pratha, we have now managed to uplift our

society and achieve significant growth and development, both social and

economic. However, even 75 years after attaining independence, India is still

shackled by numerous social and political evils and circumstances that are

posing a threat to the future well-being of our society and country.

highlighted through several incidents in the recent years. Moral policing is

essentially vigilantism veiled by the ‘need to protect our culture’. It takes

government decide to enforce morality and cause destruction of life and

property in the name of protecting their culture, religion or morals. There

lives or suffered severe abuses as a result of moral policing. It includes

cases of vandalism, mob lynching, and sometimes even terrorism. Often, these

of mob behavior. When the protectors of the law, the police engage in such

moral policing, it uses Section 292 to 294 of the Indian Penal Code to justify

such acts, and hence it often leaves no scope for a legal remedy for the

urgent redressal is crimes and discrimination against women. Patriarchy and

gender bias has existed in our society since times immemorial, and has been

passed on from generation to generation. Women are seen as the weaker gender,

and are expected to be submissive to men. They’re treated as inferior to men,

are not provided the same opportunities as them, and are discriminated against

in almost every aspect and field. Not only has this hindered women’s

development throughout centuries, it has also made them victims of sexual

assault, rape, domestic violence, female foeticide and other such heinous

crimes. Such crimes are increasing at an alarming rate, day by day.

Almost every problem in our country is, directly or indirectly, related to the high rate of

illiteracy as well as the backward outlook of the people. Consequently, a high

resolve a great deal of our problems. Moral policing primarily exists in our

country due to the regressive mentality of the people, including the government

and the police. They fail to acknowledge the concept of “live and let live” and

Similarly, no such well-read individual would commit crimes against women or discriminate against

them. The Indian society must be freed from the shackles of a patriarchal mind

set, and our women must be given the same opportunities, respect and rights as

men. This will only be achieved if each citizen is literate, and is provided an

each and every fellow human being.