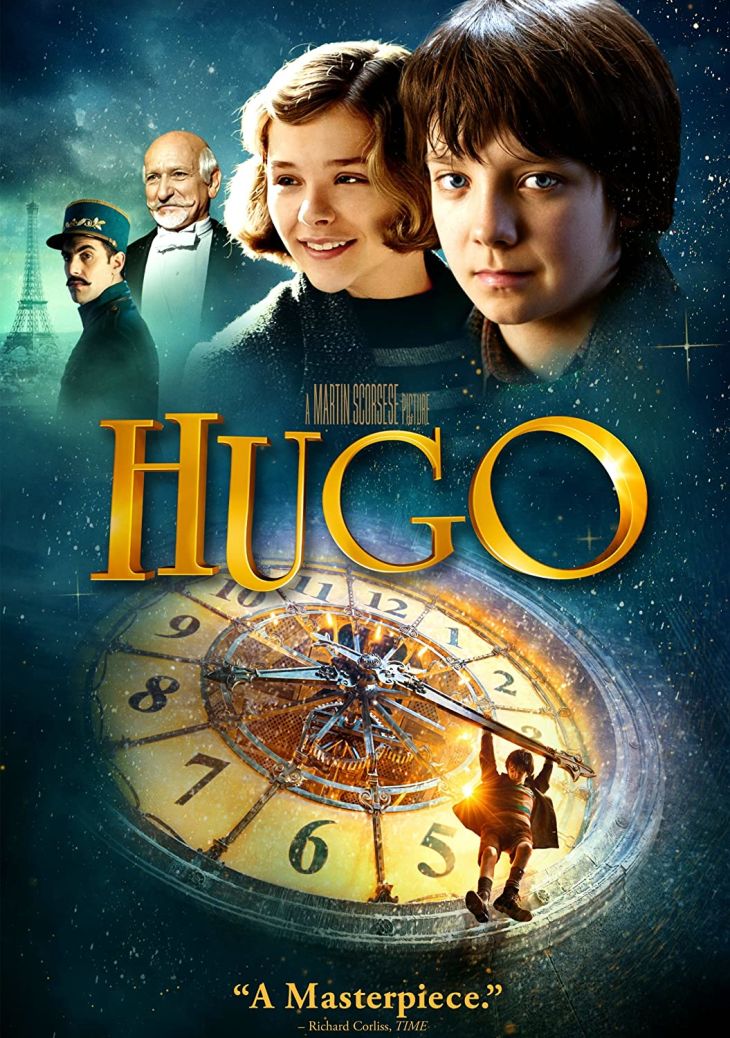 “If you ever wonder where your dreams come from, look around; this is where they’re made”.

Major motion picture production is an over 100-year-old process.  Think about that; that’s over a century worth of work, stories, and history all captured on film, preserved for the world to see.  It has been an art form and a way of life for so many people for so long that it was bound to create stories of its own for the screen stemming from what took place behind the camera.  While this is by no means a new formula in film, it is always interesting, at least conceptually, to see a movie where a major focus of the story is the movies and their makers.  Hugo, while a fictionalized tale, is one that intersects with the life and times of one of the earliest pioneers of movie making and film production, Georges Melies. 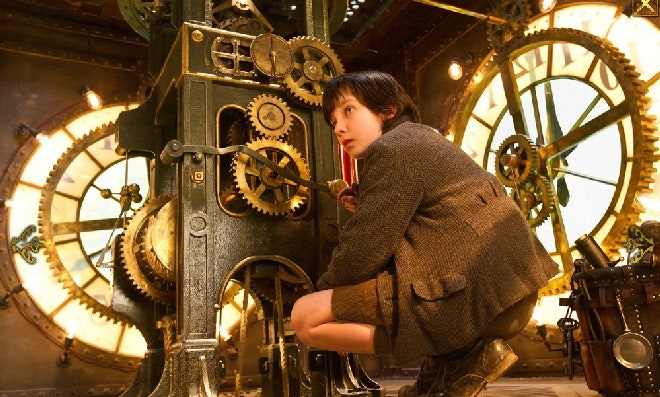 Hugo is the story of a young man named Hugo Cabret (Asa Butterfield), an orphan living in a railway station in Paris, France.  His mother died when he was even younger and his father (Jude Law), a clockmaker who taught Hugo much about his trade and to whom Hugo was very close, recently died in a fire.  Hugo lives in the railway station that employs his uncle Claude (Ray Winstone), an alcoholic who gains custody of Hugo but whom Hugo has not seen in some time, to keep up the clocks throughout the station.

Hugo lives and travels behind the clocks, keeping up maintenance on them to avoid being caught by the Station Inspector (Sasha Baron Cohen) and sent to the orphanage.  Hugo spends most of the rest of his time stealing provisions for himself and pieces he can use to work on a broken automaton he was working on with his father before his death.  On one such occasion, while trying to steal trinkets from a toy booth, the booth’s owner (Ben Kingsley) catches him and takes away his pieces and his notebook with the blueprints his father drew up for fixing the automaton.  Hugo follows the booth owner home, hoping to get his notebook back.  The owner walks inside, leaving Hugo outside in the cold, but Hugo gets the attention through a window of the owner’s goddaughter Isabelle (Chloe Grace Moretz).  Outside, Hugo pleads for her to get his notebook back and Isabelle, intrigued by the possibility of this turning into an adventure, agrees to help.  What follows is, in fact, an adventure, leading the children on a physical as well as an emotional journey.

Directed by a cinematic mastermind like Martin Scorsese, the film was bound to be great looking, if nothing else.  However, being that this film was shot in 3D, a genre in which Scorsese hasn’t worked before, a healthy amount of skepticism may creep into the mind of potential audience members.  Well, I’m here to say fear not, this film is beautiful.  Hugo puts 3D to its best use yet, rendering a field of depth onscreen that would make Orson Welles lose his mind with jealousy.  Granted, there are a few of the cheesy “let’s-have-stuff-come-at-the-camera” moments, but the 3D visuals shine most brightly in scenes where more is happening in the background than in the foreground.  This would be a wonderful-looking film with or without the 3D, but, again, Scorsese proves that even something that’s been made trite by over and improper use can be excellent in a master’s hands.

As well, the cast of the film keeps this fantastical story grounded with very committed performances.  Kingsley is wonderful as the inexplicably downtrodden and mysterious toymaker, Butterfield is remarkable as the pitiable and adventurous title character, and even minor supporting players such as Jude Law and Emily Mortimer make the most out of their limited screen time.  Despite the exceptional work by the entire cast, I feel special recognition is deserved in the case of Chloe Moretz and Sasha Baron Cohen.  Moretz has become one of the best child actresses to break out in recent years and her hot streak continues with her role as Isabelle, Hugo’s bookish partner-in-crime who’s looking to experience an adventure instead of just reading about one.  As for Cohen, this is the first role I’ve seen him play that is not meant to be overtly offensive and, in fact, has to be family-friendly.  He does a wonderful job of not only being the antagonist but also providing comic relief, two traits that might otherwise conflict if not put in the hands of a proven wisenheimer.