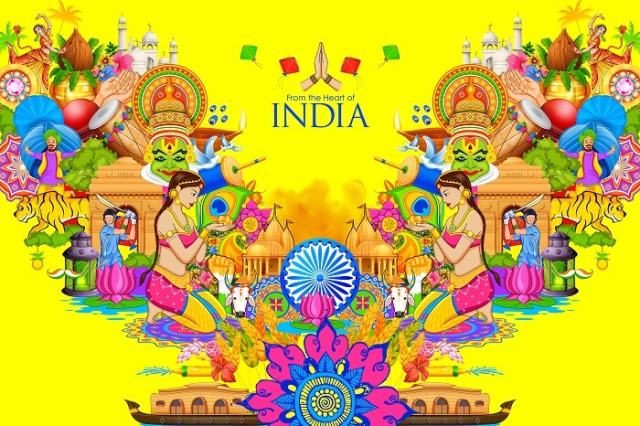 Diverse landscapes… rich cultural heritage… distinct geographical entity and a plethora of diversity! The above description is a perfect fit for the most fascinating country, India. Along with possessing a unique and unparalleled culture, our country also holds in its embrace some of the most interesting and fun facts. Proof? Here you go!

1. Tops the chart in “Milk Producers”- Love milk and dairy products? Here’s an interesting fact for you! Our country tops the chart in the list of milk producing countries and that makes India the world’s largest milk producer, producing approximately over 176.3 million tonnes of milk per year.

2. Name “India” derived from River Indus- Our country derived its name back in the days of Indus Valley Civilization from the river Indus which was inhabited by the early settlers, Aryans.

3. ‘Shatranj Ke Khiladi’ – Born in India, Literally! - Earlier known as Chaturanga, the game of chess was invented in India back in the 6th century AD. Now spread worldwide, Chess was earlier known as Shatranj and was played by emperors.

4. Land of Algebra & Trigonometry- From Algebra to trigonometry, from Aryabhatta to Bhaskara II , India is a home to all.These very important concepts and equations that hold quite an importance in our daily lives, traces its origin back to India.

5. Longest Written constitution- Along with being the world’s largest democracy, India also has the longest written constitution of any sovereign state in the world. Consisting of 449 articles, 12 schedules in 25 parts, India tops the list here too!

6. Hinduism, Sikhism, Jainism and Buddhism- Founded in India- From Hinduism to Sikhism, from Buddhism to Jainism, India has witnessed the origin of some of the most important faiths in the world of religion. Undoubtedly, India was and remains the most secular country in the entire world.

7. India- land of yogis- The practice of yoga originated in India over 5,000 years ago by the father of yoga, Patanjali. It was from here that yoga spread its wings all over the world.

8. World’s only floating post office- India is home to world’s only “floating” post office that lies on Dal lake in Srinagar. Inaugurated in August 2011, it is indeed a unique piece of architecture amidst the picturesque mountains of Kashmir.

9. Home to world’s largest festival- Kumbh Mela-It is quite interesting to note that Kumbh Mela, a major pilgrimage festival held once in every 12 years is visible even in space! What’s even more interesting is that it is held in our very own country, India!

So, If India is on your bucket list too, you have enough reasons to pack your bags and explore this captivating land already!