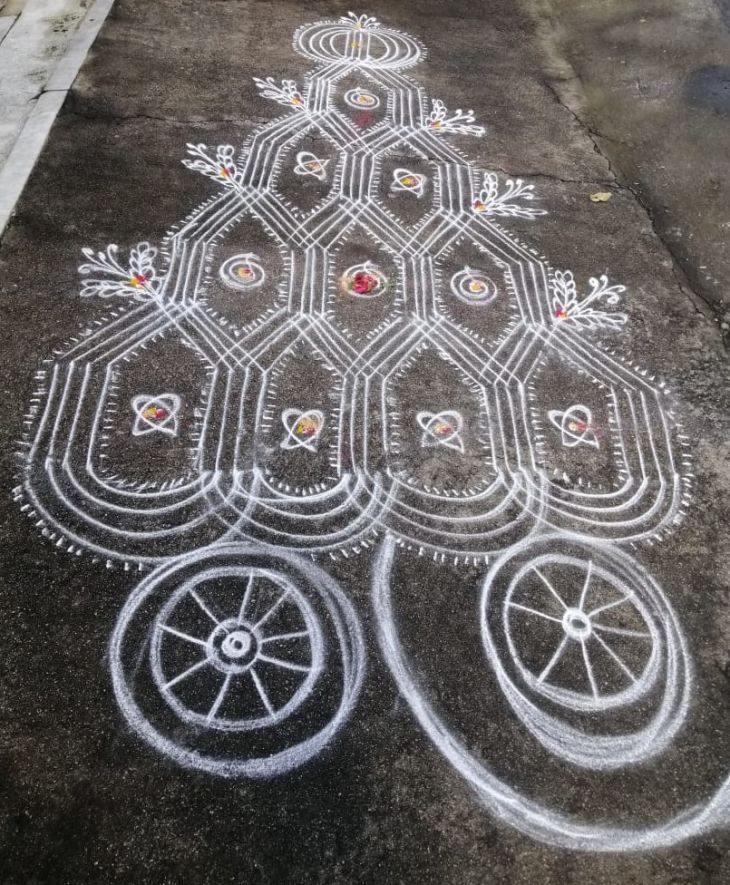 Today, while having my morning coffee, the design on the threshold of my parents' house captured my attention. It wasn't something that I hadn't seen earlier nor a rare sight to see my mother drawing it diligently every day. It struck me that even a stranger can easily conclude that my mother is an art lover, a great planner, a perfectionist, and extremely precise by looking at the design. The ground is her canvas, her hands are her only tool, and the magnificent art piece she creates every day is called as Muggu (in Telugu)

Muggu is an intricate design drawn on the floor or ground, using rice flour, chalk powder. It originated in Tamil Nadu and spread to many states in India and also to many Asian countries. It is called by many names like Kolam, Aripan, Rangoli, Hase, Rangolee, etc. The basic muggu is drawn using a few dots and lines/curves. However, complex designs involve hundreds of dots with interlinking curves or numerous symmetrical shapes.

This is a skillful art because a person should hold the rice flour in-between the index finger and the thumb and drop it consistently in a uniform manner until the pattern is completed. While some designs are very complex and require mathematical skill because the number of dots should be calculated with no dot left out or unattended. A few are created in the nick of the moment too. Hence muggu can be considered as a test for the precision, concentration, creativity, and patience in an individual.

It is said to be as old as the Indus Valley civilization. People believed that these patterns would attract good luck and fortune to their business and home.

It is also said that Gopikas used to pass the time by drawing muggu when their beloved Krishna was away.

A few historians also say that muggu was designed by shore dwellers. They would draw this in front of huts as a pattern of stars and constellations that will help them venture into the sea.

Traditionally,muggu is considered a symbol of prosperity and well-being of the house. It is believed that the presence of a muggu signifies that everything is fine in the household, and the absence indicates otherwise.

Rice flour is used in putting muggu, which forms as a source of food for birds, ants, and many other tiny beings. And is considered as a symbol of harmony and co-existence with all the beings in nature.

All the lines in the muggu are supposed to be completed and never left open-ended. It is believed that this will prevent the evil forces from entering the muggu, which indirectly means to ward off the evil forces that try to enter the households.

In the muggu, many designs have a philosophical or religious significance. For example, drawings of animals symbolize the unity of the man and the beast. The man and the woman are represented as upward and downward pointing triangles. Nature is shown as a circle and culture as a square. A pentagram is Venus and the five elements.

Because of the intense stretching and bending, the women get good exercise early in the morning and also calms the mind because of the chanting of holy mantras at the wee hours of the day, i.e., Brahmamuhurtam (auspicious time)

Due to the compact living in the cities and towns, most people prefer using stickers of these designs to decorate the thresholds or verandahs. This traditional art of decorating the floor every day is limited to small villages or old houses and seldom seen. This art can be seen on a few significant festivals or occasions, but rice flour is rarely used and is replaced with chalk. We need to learn and practice this art so that it doesn't perish and also hand it over to further generations to cherish this art form for years to come.

P.S. The muggu in the photo is called Radham muggu and is done by my 62-year-old mother, on the occasion of Makar Sankranti.