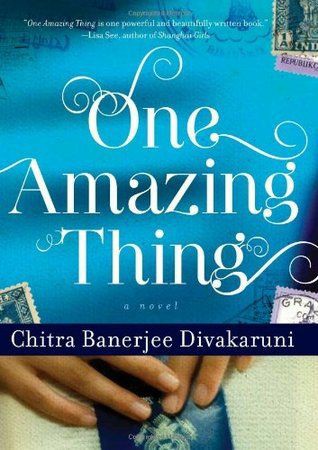 "One Amazing Thing" is a 2010 novel of Chitra Banerjee Divakaruni is all about the reasons to survive. The story revolves around a group of people who are trapped in a visa office after a massive earthquake and about how they try surviving in the dark place with no way out of the debris surrounding them. This novel was first published in Voice by Hyperion 2009 in the United States, but later it was published in Hamish Hamilton by Penguin Books India 2010.

A group of nine people is stuck in the visa office at an Indian Consulate after a massive earthquake hits one American city. Amongst them were Jiang, a Chinese-India woman in her last years; her gifted teenage grand-daughter, Lily; Cameron, an ex-soldier; Uma, an Indo-American girl; Tariq, a young Muslim man; two visa officers; and a wedded couple.

When the afternoon sun peeks through the windows of a passport and visa office in an American city, it witnesses the presence of only nine members left there while many have come and gone. Uma is bewildered by her parent's decision to return to Kolkatta after 20 years. Tariq seems to be angry with the new America and struggling with the fallout of 9/11.

Cameron seems to have fallen prey to some guilt factor. The visa officers are on the verge of an adulterous affair. A graduate student is there too, who is haunted by the biggest question of his generation question i.e love. The couple was elderly & seemed furious. After several attempts escape from the debris formed around them due to the destruction caused by earthquake, they concluded that there is nothing they can do than waiting for help.

Meanwhile, they ration out some food and water that they had with themselves and try to make it last as long as they can. The office begins to flood. While they wait to be rescued or to die, the young graduate student suggests that each tell a personal tale, "one amazing thing" from their lives, which they have never told anyone before. Hence, they take up storytelling as their leisure activity and begin telling stories of their lives.

Each victim recalls "one amazing thing" of their life, and shared the moments & things they never spoke of, before. And, as their surprising stories of romance, marriage, family, political upheaval, & self-discovery unfold against the urgency of their life-or-death circumstances, the novel proves the inspiring power of stories and the meaningfulness of the human expression itself. Their tales are tragic yet life-affirming, & throw light on the meaning of being a human and the power of story-telling.