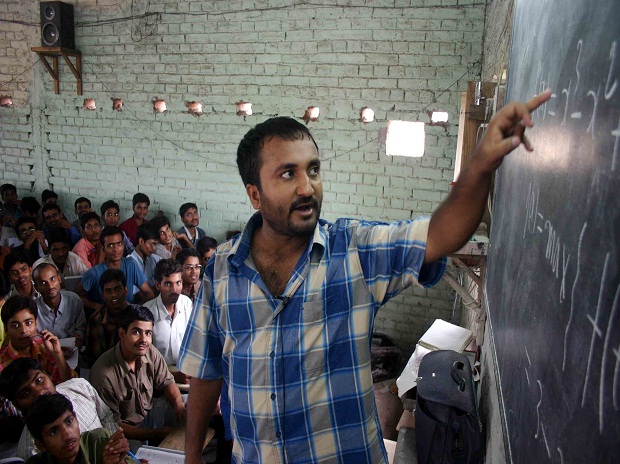 Anand Kumar is an Indian Mathematics educator who was born on January 1, 1973. He is best known for his Super 30 programme, which was started by him in Patna, Bihar in the year 2002 and in this programme he coaches underprivileged students for IIT-JEE, the entrance examination for the Indian Institute of Technology (IITs). By 2018, 422 students out of the 481 students had made it to the IITs and his documentary was showcased by the Discovery Channel. Kumar has spoken about his programs at many institutes like Harvard and MIT. His life and work have been portrayed by a movie released in the year 2019, named Super 30, in which Kumar was played by Hrithik Roshan.

He was born in Bihar, India. His father was a clerk in the Indian Postal Services. Anand’s father could not afford the private education for his children so Anand attended a Hindi medium government school, where he developed his cavernous interest in Mathematics. During his graduation period, he submitted some work papers on number theories, which were published in the Mathematical Spectrum. He also secured admission to the University of Cambridge but his father’s death and financial constraints didn’t let him to get himself actually admitted.

His teaching career started in the year 1992 when he began teaching Mathematics. He rented a room for Rs. 500 a month and began his institute named the Ramanujan School of Mathematics. Within a year the strength of his classroom increased from 2 students to 36 students. In three years, this number increased to 500 students. Then came the time when Super 30 was breathing its first breath. In early 2000, a poor student came to him for seeking coaching for IIT-JEE and he could not afford the annual admission fee and this event motivated Kumar to start the Super 30 programme.

Now, every May the Ramanujan School of Mathematics holds a competitive test to select 30 students for the Super 30 programme. Many students take the test and out of all he selects 30 most intelligent students from economically backward sections of the society and he tutors them and prepares them for the Joint Entrance Examination for the Indian Institute of Technology. His mother, Jayanti Devi cooks food for the students and his brother Pranav Kumar takes care of the management.

Kumar had recently revealed that he had been suffering from Acoustic Neuroma, a rare kind of brain tumour, and due to it, he has lost 80-90% of his hearing ability of the right ear. He is being treated by renowned neurosurgeon B.K. Mishra at the Hinduja Hospital in Mumbai.

A. He was inducted in the Limca Book of Records for his contribution to help children pass in IIT JEE.

B. Super 30 was included in the list of Best of Asia by TIME magazine.

C. Kumar was presented with the S. Ramanujan Award in 2010 by the Institute for Research and Development in Social Sciences (IRDS) in July 2010.

D. He was also selected by Europe’s Magazine Focus as “one of the global personalities who have the ability to shape exceptionally talented people.”

E. He was named among the 20 pioneering teachers in the world by a UK magazine.

F. Honored by the government of British Columbia, Canada.

G. Honored by the ministry of education of Saxony of Germany

H. Given the Baroda Sun Life Achievement Award by Bank of Baroda in Mumbai.

I. Conferred with an Honorary Doctorate of Science (DSc)

K. A Canada-based psychiatrist Biju Mathew with journalist Arun Kumar had written a biography on Anand’s life which was presented by Anand Kumar to the then President, Pranab Mukherjee.

Awards and Recognition are less for a great personality like him who has dedicated his whole life for the benefit and nourishment of the weaker sections of the society. Today, when teaching has become only a source of income, he has set a benchmark for everyone, by giving the precious gift of education to the children. He is not a reel hero but a real-life hero who has proved that passion is above everything. One should see opportunities beyond the boundaries and one should never let the desire of achieving new highs die. Underestimating anyone in this competitive world is the biggest mistake one can do. So, “Start learning beyond the limits.”