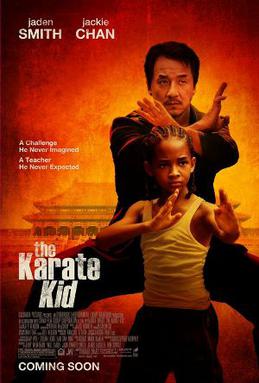 Welcome back my dear readers!

I hope you all are doing well. As you all know vaccination of COVID-19 has begun and soon we will able to enjoy our freedom again as we did before the pandemic. Till then guys, to get some entertainment and refreshing feeling, I am here to tell you about a movie full of actions & emotions.

Beginning with some basic information, The Karate Kid, known as The Kung Fu Dream in China, is a 2010 wuxia martial arts drama film directed by Harald Zwart, and part of The Karate Kid series. It stars Jaden Smith and Jackie Chan in lead roles, and it was produced by Jerry Weintraub, James Lassiter, Ken Stovitz and Jaden's parents Will Smith and Jada Pinkett Smith. It is an international co-production between China, Hong Kong, and the United States. The Karate Kid was released theatrically worldwide on June 11, 2010, by Sony Pictures.

The story revolves around a 12-year-old boy Dre Parker of USA, who along with his widowed mother shifts to Beijing, China as she got a job in car factory there. At first Dre found China very fascinating. When he went to a park, nearby his house, he saw a young violinist, Meiying, who reciprocates his attention, but a 14-year-old Chinese boy named Cheng, a rebellious kung fu prodigy whose family is close to Meiying's, holds a grudge against Dre and keeps them apart by brutally attacking, teasing and bullying.

One day, Cheng and his friends crossed their limits and Dre threw a bucket of dirty water over them. This made them angry and they all started to beat Dre brutally. He tried to run and somehow reached the backyard of his house but still Cheng caught him. They were beating Dre like no MERCY exist in the entire universe. Fortunately, Mr. Han (Jackie Chan), maintenance man of Dre,s apartment saved him by his anonymous kung fu skills. Mr. Han took Dre to his home and treated him well by providing him some nutritious food and aiding his wounds.

Dre requested Mr. Han to teach him kung fu as he knew by then that this person is not just a maintenance man. After so many requests, Mr. Han agreed and a tough training begin. The man told the boy that kung fu is not for violence but for defense and along with physical training, he taught him some important moral values too. Mr. Han asked Dre to take part in a competition of kung fu which held every year and identify himself as a true warrior.

The plot gives a small hint that Dre was in love with Meiying and deep down she liked him too.

At the end of the competition, in the semifinals, Cheng’s friend brutally broke Dre’s leg. He was disqualified after this shameful act. Dre was then admitted to the hospital. Mr. Han asked him not to fight anymore; he has proved himself, but Dre wanted to fight. After asking the reason behind his desperation to fight, Dre replied, “I am still scared. Scared of being bullied again. I don't wish to win the finals, what may the result will but I just want that after this competition, I can be proud of myself that I can face anyone”.

After listening to the words of Dre, Mr. Han made him relief by an aiding method fire cupping and then he went to the ring to fight Cheng in the finals. And wow, Dre won. But do you think his victory was easy to achieve? He suffered in the finals too and made him winner with a special move which he only had seen once and never practiced.

The deep meaning which the movie hides inside it is you are never a failure. Get out of your comfort zone, pressurize yourself & improve your previous version. Be your best instead of making the others fall.

There is a lot more in the story which will give you goosebumps. Slight romance with action and will to be the best.

This drama is all about A CHALLENGE HE NEVER IMAGINED WITH A TEACHER HE NEVER EXPECTED.