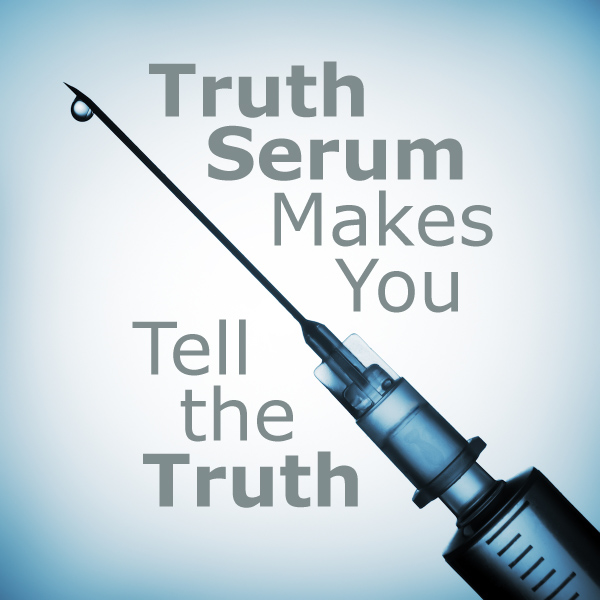 "The truth serum" isn't this word seems interesting? So i think you all must have understood about this serum by the name itself. Yes it is a drug by which one can find out the truth.

Actually i was watching a serial yesterday and i just heard about this drug where they wanted to give this drug to someone so that that person confess the truth herself.

I found this medicine quite interesting and thought of writing about it. So i just search about the truth serum and got to know the name of this drug.

Truth serum" is a colloquial name for any of a range of psychoactive drugs used in an effort to obtain information from subjects who are unable or unwilling to provide it otherwise. These include ethanol, scopolamine, 3-quinuclidinyl benzilate, midazolam, flunitrazepam, sodium thiopental, and amobarbital, among others.

Although a variety of such substances have been tested, serious issues have been raised about their use scientifically, ethically and legally. There is currently no drug proven to cause consistent or predictable enhancement of truth-telling. Subjects questioned under the influence of such substances have been found to be suggestible and their memories subject to reconstruction and fabrication. When such drugs have been used in the course of investigating civil and criminal cases, they have not been accepted by Western legal systems and legal experts as genuine investigative tools. In the United States, it has been suggested that their use is a potential violation of the Fifth Amendment of the U.S. Constitution (the right to remain silent).

There are some common side effects of these drugs such as :

Some serious side effects of these drugs include:

And rare side effects include:

Barbiturates may alter the results of some medical tests.

Barbiturates may cause drowsiness, dizziness, lightheadedness, or decreased alertness. These side effects may be present the morning after taking a barbiturate at bedtime. Do not drive, use machines, or do anything else that could be dangerous until you know how barbiturates affect you.

Children may be more sensitive to barbiturates and have additional side effects such as unusual excitement.

Older people and those who are very ill may also be more sensitive to barbiturates and have additional side effects such as confusion, depression, and unusual excitement.

So guys I hope you all found this article interesting and somewhat informative.

Special Suggestion : Don't try this with your friends just for fun. It can be so dangerous.